The Jews of Anatevka take what they can carry and leave their home, knowing that most of them will never see each other again. Behind them on a banner is the single word, "Torah," ripped in two by the maurading Cossacks but carefully sewn back together. Wherever they go, the Jews will take the Torah with them. (Photo: Victor Nechay/ProperPix)

Credits: The National Yiddish Theatre Folksbiene's "Fiddler on the Roof" was directed by Joel Grey with a book by Joseph Stein, music by Jerry Bock and lyrics by Sheldon Harnick. The thrilling choreography is by Jerome Robbins with musical staging and new choreography by Stas Kmiec. Zalmen Mlotek is the music director. For more information and to buy tickets, click here. 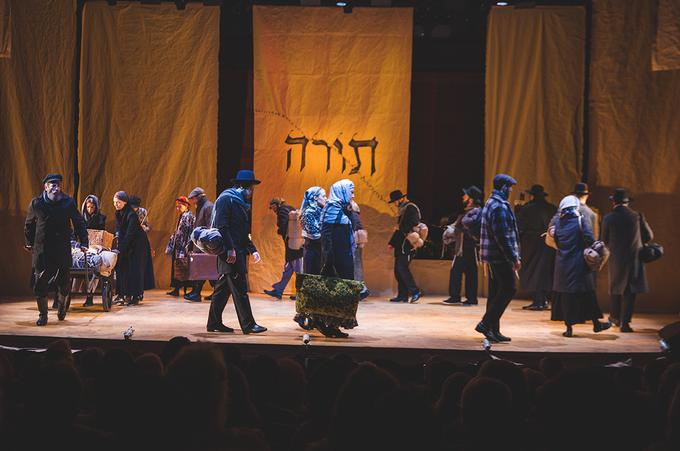 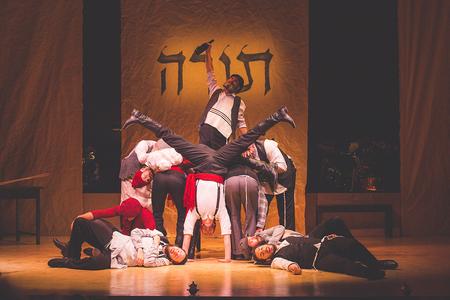 The opening number of "Fidler Afn Dakh" - a production of "Fiddler on the Roof" in Yiddish at the Museum of Jewish Heritage in Battery Park City with Steven Skybell as Tevye the Milkman and Ensemble. (Photo: Victor Nechay/ProperPix)

A fiddler leaps onto the stage, playing a haunting melody on her violin. She's a conjuror with a story to tell.

Once upon a time there was a shtetl called Anatevka. It was somewhere in Russia, in the Pale of Settlement where Jews were forced to live. They had lived there for a long time - long enough to have buried their grandparents there, long enough for children to have been born there and to have had children of their own. Anatevka was home and the Jews there were like family. Everyone knew their place and what was expected of them. Tradition shaped their lives. Tradition!

And in that shtetl there lived a dairyman named Tevye with his wife, Golde, and their five daughters who would need dowries so they could marry but Tevye was only a poor milkman with a lame horse. He had to pull his milk cart through the streets of Anatevka himself when he tried to sell his wares.

And so the story unfolds.

None of this is true. It was all made up in the late 19th century by a writer who called himself Sholem Aleichem. (His real name was Solomon Naumovich Rabinovich.)

But it's all true and more true in this production of "Fiddler on the Roof" produced by the National Yiddish Theatre Folksbiene at the Museum of Jewish Heritage in Battery Park City than it was in cavernous Broadway theaters where "Fiddler" with Zero Mostel as the original Tevye captivated audiences beginning in 1964 or in five succeeding Broadway revivals or in the film released in 1971 with Chaim Topol as Tevye.

The current "Fiddler" in Yiddish with English and Russian super-titles is more intimate, more touching, more authentic, funnier, sadder, more passionate. The sets are minimal but with great acting, dancing, singing and direction nothing more is needed.

Yes. Anatevka exists. By their tears, laughter and applause, many in the audience for this production seem to have come from there. They may never have seen Anatevka but they remember it - the place where the fiddler played sweet melodies from his perch on the roof despite poverty and pogroms - the place where a Jew like Tevye could talk with God and often did. They had long conversations. Tevye was always respectful but often asked God why he couldn't make things just a little easier for the Jews.

In this production of the musical with a book by Joseph Stein, music by Jerry Bock and lyrics by Sheldon Harnick, Steven Skybell plays Tevye, Mary Illes plays Golde and Jackie Hoffman plays Yente the matchmaker, but it would be wrong to single out any one person for commendation. Everyone in the cast is superb. The acting and the singing are excellent. The dancing, choreographed by Stas Kmiec, is thrilling.

Joel Grey, 86 years old, who may be best remembered in his long and illustrious career for his role as the Master of Ceremonies in the stage and film versions of the musical "Cabaret," directed. He won Academy, Tony and Golden Globe awards for "Cabaret." He knows what he's doing and it shows.

A note in the program says that Grey had long admired "Fiddler on the Roof," which he considered "one of the great works of the American musical theater." When Zalmen Mlotek, the artistic director of the National Yiddish Theatre Folksbiene and the music director and conductor for "Fidler Afn Dakh," asked Grey to direct this production, he replied, "I could only say 'Yes!'"

In 1965, "Fidler" was translated into Yiddish by Shraga Friedman, a Warsaw native who had emigrated to Israel at the outbreak of World War II. The Yiddish "Fidler" had been performed in Israel but never before in the United States.

Grey came from a Jewish family, the son of Goldie "Grace" (née Epstein) and Mickey Katz, a Jewish actor, comedian, and musician, but he doesn't speak Yiddish. Neither do three-quarters of the 26-member cast. They learned their roles by being given scripts with transliterated Yiddish flanked by the literal English translation and by the words of the original production, some of which were altered for this "Fidler."

Grey said that he selected the cast members for their acting talent and theatrical experience, not for their Yiddish fluency.

But Yiddish is a powerful force in this production, expressive and emotive in a way that informs the acting. This "Fidler" brims with feeling. Tevye tries to play the stern patriarch, but he loves his daughters so much that he can't quite manage it. He wants them to be cared for and happy.

In one of the most poignant scenes, he accompanies his daughter, Hodl, (Stephanie Lynne Mason) to the train station, where she will take a train to Siberia to be with her husband, Pertshik (Daniel Kahn), who has been arrested for his radical political activities. Tevye lingers with Hodl as long as he can. She assures him that she will be all right. When he finally turns away, knowing he may never see her again, he asks God to take care of her and keep her warm.

"Fiddler" ends, as most of the audience must surely know, with a decree that all of the Jews have three days to sell their possessions and leave Anatevka. Taking what little they can carry, they bid each other goodbye. Yente, the widowed matchmaker, says that she will go to Jerusalem, where surely matchmakers are needed. Tevye's oldest daughter, Tsaytl (Rachel Zatcoff), and her husband, Motl Kamzoyl, the tailor (Ben Liebert), and their baby, will go to Poland. Khave, Tevye's third daughter (Rosie Jo Neddy) and her Russian husband, Fyedke (Cameron Johnson), will go to Krakow. Tevye and Golde and their youngest daughters will go to America.

And so they pick up their burdens and begin their long journey as the fiddler (Lauren Jeanne Thomas) plays her tune. Once upon a time there was a village called Anatevka. You may remember it. If you close your eyes and listen, you can still hear the fiddler on the roof.

'FIDDLER ON THE ROOF' OFF-BROADWAY

"'Fiddler on the Roof?' I've seen it with Zero Mostel (Topol, Theodore Bikel, Herschel Bernardi, Alfred Molina....you fill in the blanks.) I loved it, of course, but I don't need to see it again." That was what some people must have thought when the National Yiddish Theatre Folksbiene announced a new production of "Fiddler," opening on July 4, 2018 at the Museum of Jewish Heritage in Lower Manhattan. Except that this Fiddler was in Yiddish - "Fidler afn Dakh," with English and Russian supertitles, and it turned out to be more touching, more authentic, more passionate, more intimate, funnier and sadder than the Fiddler's that played to huge crowds on Broadway.

The National Yiddish Theatre Folksbiene's Fiddler was originally supposed to close on Aug. 26, 2018 but the run was extended again and again. Finally the last show in the Museum's auditorium closed on Dec. 30, 2018 after having been sold out night after night.

The answer is yes! A resounding yes! Nothing was lost. Is it possible that it was better? Or is it only that this Fiddler is so powerful that despite numerous viewings, each time is like the first, bringing a lump to the throat and maybe even tears to the eyes when the fiddler (Lauren Jeanne Thomas) conjures up the village of Anatevka with her haunting song and Tevye, the milkman (Steven Skybell) appears to explain that it's "Tradition!" that holds the community together.

The cast, most of it brought from the downtown production, is uniformly excellent. The major additions are Jennifer Babiak as Tevye's wife, Golde, Lisa Fishman as Bobe Tsaytel and Drew Seigla as Pertshik. Jackie Hoffman is back as Yente, the matchmaker who wasn't so thrilled with her own late husband ("May he rest in peace!") but who nevertheless diligently attempts to pair couples with a pragmatic eye and no sentimentality.

Skybell's Tevye is a wonder. Until his three eldest daughters decide to marry for love, a word not previously in his vocabulary, his life consisted of working hard, talking frequently with God, living according to the "good book" and viewing the world with realism, amusement and wit. But even though he didn't think of that word, he loved. He loved his family and his village and his neighbors despite their idiosyncrasies and flaws, making the loss of Anatevka heartbreaking. All of this Skybell conveys with energy and emotional honesty.

The Off-Broadway Fiddler was supposed to close in mid-July. The run has now been extended until Sept. 1. See it. See it again. 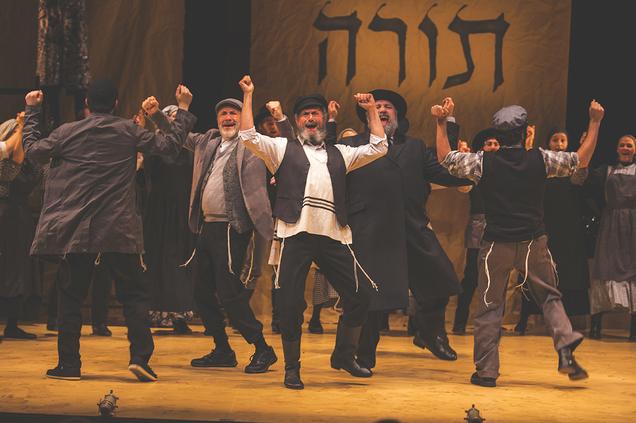 (Left) Steven Skybell as Tevye and the male ensemble in "To Life!" (Right) Jackie Hoffman as the matchmaker, Yente. (Photos: Victor Nechay/Proper Pix)

'FIDDLER ON THE ROOF' AT THE MUSEUM OF JEWISH HERITAGE 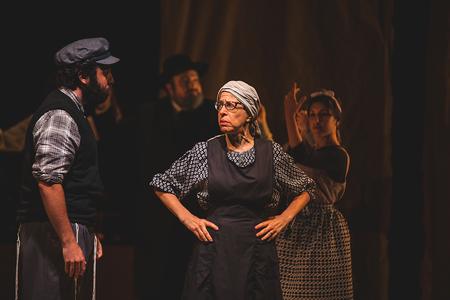