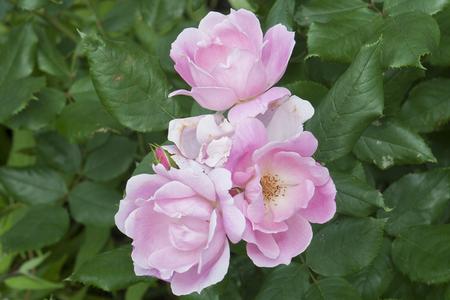 The trilliums blooming in Battery Park City's Teardrop Park are eye-catching, both because of the size of the flowers and their brilliant white color, which stands out sharply against the surrounding greenery.

All of the vegetation in Teardrop Park is native to this region of the country. The distinctive three-petaled flowers of trillium (Trillium grandiflorum) can be found in the deciduous forests of eastern North America as well as in Battery Park City.

Trilliums take 17 years to mature. A plant can live as long as 70 years - if the white-tailed deer don't get it. This is one of their favorite foods. They prefer to eat the large plants, and since trilliums grow slowly, the ravenous deer population has depleted it to the point of "endangerment" in the state of Maine. In New York State, it is considered "vulnerable."

The seeds of trillium are primarily disbursed by ants, who collect the seeds as food. The residue when the meal is finished is still viable, and the ants will have performed a service by depositing the seeds away from where the original plants were growing.

Trilliums have several medicinal uses. The root is a diuretic. Grated, it is said to reduce swelling in the eyes and pain in rheumatic joints. Additionally, the leaves can be boiled and eaten like spinach - it is alleged.

April: Battery Park City in bloom: Tulips and Viburnum
A tapestry of hundreds of vividly colored tulips blooms in April just south of Brookfield Place. We can thank the Turks of the Ottoman Empire for this stunning display. They were the first to cultivate tulips commercially, introducing them to the Netherlands in the 16th century. (The botanical name for tulips comes from a Turkish word, “tulbend,” or turban.) By the early 17th century, the cultivation of tulips in Holland had become a mania. A single tulip bulb was sometimes worth more than a house.

Less showy than the array of tulips, a shrub with clusters of waxy, white flowers is blooming in South Cove. It would be possible to walk right by it except for one thing. Koreanspice Viburnum (Viburnum carlesii) is among the most fragrant plants in Battery Park City’s gardens. As its name implies, it grows wild in Korea. You don’t have to know exactly what it looks like to recognize it. You will know it by its smell. 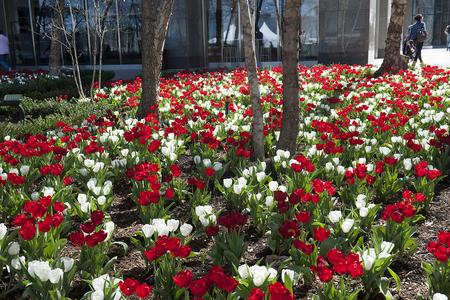 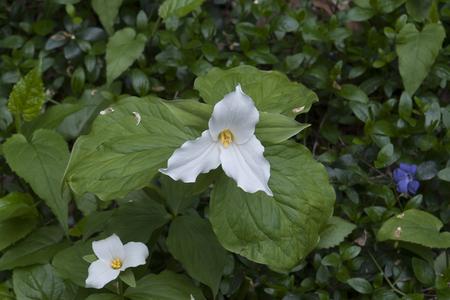 June is the month for roses, and Battery Park City has them in abundance. The aptly named 'Blushing Pink' Knock Out Roses growing on the esplanade could stop you in your tracks - they are so exquisitely colored and so beautifully shaped.

William Radler, a Wisconsin horticulturist, bred them to maximize their hardiness and effulgent blooms. They came onto the market in 2000 in a shade of red-violet, and since then, have appeared in a variety of colors, including a sunny yellow.

There are more than 100 species of roses, most of them, native to Asia. They have been cultivated as ornamental plants for at least 2,500 years.

The word "rose," comes from French, derived from the Latin word, "rosa."

Among the great and famous rose gardens of the 19th century was that of the French Empress Josephine (Napoleon's wife), who bred roses in her gardens at Malmaison. Josephine picked up the estate, seven miles outside of Paris, while her husband was away fighting in Egypt. He was said not to have been pleased at her purchase. The place was run down and cost a bundle. But eventually, he came around to her point of view.

To create her rose garden, Josephine acquired plants from her native Martinique as well as from elsewhere in the world. She grew more than 250 kinds of roses and was so enamored of them that she had a well-known Belgian artist of the time, Pierre-Joseph Redouté, create paintings of them.

Eventually, Josephine and Napoleon divorced. She lived at Malmaison among her roses until her death in 1814.

Battery Park City's 33 acres of parks and gardens are among the most beautiful in New York City. They are planted with approximately 400 kinds of flowers and shrubs from all over the world. Many of these plants have interesting histories that relate to where they originally grew, who discovered them, and how they were exported and in some cases, hybridized. Some of the plants historically had medicinal uses. Some are native to New York state and the mid-Atlantic region and were known to its original inhabitants, the Leni Lenape, who used them in various ways. One of Battery Park City's parks — Teardrop — is planted exclusively with native vegetation.

Like its flowers and shrubs, Battery Park City's trees are interesting. Among them are the three dawn redwoods (Metasequoia glyptostroboides) in Rockefeller Park.  They are native to Lichuan county in Hubei province, China where they date back more than 65 million years to the time when dinosaurs were alive. Although they have needles like evergreens, they shed their needles in winter. Known as fossils, they were long thought to be extinct, however a stand of them was discovered in China in 1941. After World War II, some botanists from Harvard University retrieved some of these trees and cultivated them. All of the Metasequoia glyptostroboides now in existence descend from those trees.

Battery Park City's gardens are cultivated using organic methods of pest control and fertilization that have been replicated elsewhere. In at least one instance, Battery Park City has functioned as a living laboratory. The eastern side of Rector Place park is planted with yew shrubs of various kinds. The idea was to see how they would do under organic husbandry.  They have done very well.

April and May: Battery Park City in Bloom: Large Fothergilla

Starting in April, an interesting looking plant with flowers that look like white bottle brushes decorates the esplanade near West Thames Street. This plant, called Large Fothergilla (Fothergilla major) or witch alder, is native to the American southeast. Its spiky flowers have no petals. The white blooms are actually a clutch of stamens — the male fertilizing organ of a flower.

The plant was named for John Fothergill (1712-1780) an English physician and plant collector. In the practice of medicine, he was innovative and prescient. He lectured about mouth-to-mouth resuscitation and was one of the first doctors to identify streptococcus as a cause of sore throats.

He was fascinated by botany. In his home at Upton near Stratford, he grew plants from all over the world. He sponsored scientific expeditions to the South Seas and also bankrolled William Bartram, the American botanist and son of the famed botanist John Bartram of Philadelphia. The younger Bartram traveled through the southern United States from 1773 to 1776 and probably came across witch alder at that time.

Fothergill and the Bartrams were Quakers. Fothergill commissioned and paid for a Quaker Bible and founded a Quaker school called Ackworth in West Yorkshire. Battery Park City’s Fothergilla is a lovely tribute to a man who did much good in his 68 years of life, advancing human well-being and knowledge. 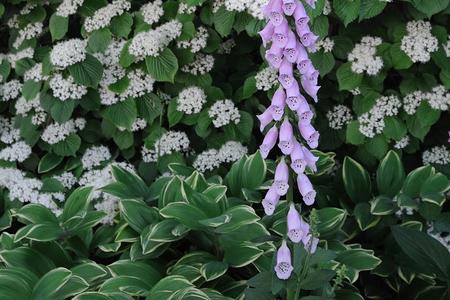 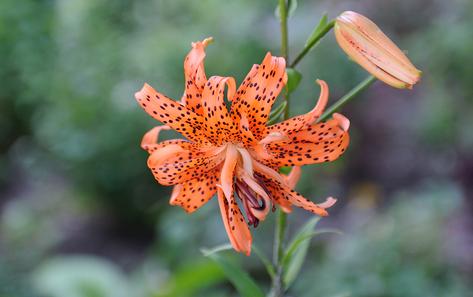 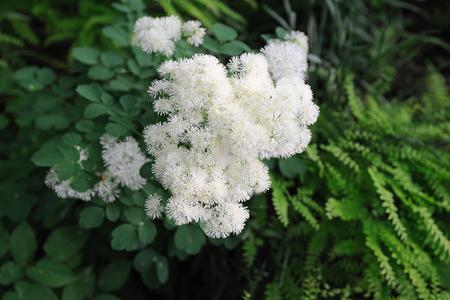 In late summer, many kinds of lilies bloom in Battery Park City. Among the most flamboyant are tiger lilies (Lilium flore pleno) displaying speckled orange flowers near Albany Street on the esplanade.

These lilies are native to eastern Guam, China, Korea and Japan. In China, they were cultivated for food.

The great 18th-century botanist Carl Linnaeus came up with the name “Lilium” for this genus of flowers. The Latin name has a distinguished linguistic pedigree. It was derived from a Greek word, “leírion,” which, in turn, emanated from a word for “flower” used in ancient Egypt. Both the Greek and Egyptian words may be the remainders of a language once used in the Eastern Mediterranean and now forgotten.

Lilies figure prominently in the Bible (“I am the Rose of Sharon and the lily of the valley” and “like a lily among the thorns” in the “Song of Solomon”), but it’s probable that the lily to which the Old Testament refers is not the same as the flowers now known by that name. In the New Testament, they were associated with the Virgin Mary and her purity.