New York City was holding its breath. After lashing Florida, weakening somewhat and then gaining hurricane strength in the Carolinas, Isaias was headed toward New York.

Based on projections from the National Weather Service, the city's Office of Emergency Management stated that Lower Manhattan was the most vulnerable place in the city. So it was here that the OEM decided to roll out the orange carpet in advance of the storm.

The orange carpet is, in fact, a series of Tiger Dams laid end to end, almost a mile long. It runs from Wall Street to Catherine Slip near the Brooklyn Bridge. Each section is an inflatable tube that can be filled with water from a fire hydrant or other water source. Filled with water, each tube weighs 6,300 pounds. If necessary, the tubes can be stacked on top of each other.

The Tiger Dams connect to HESCO barriers - fabric lined, wire mesh cubes filled with compacted sand that have been placed strategically throughout the Seaport and elsewhere in the city on a semi-permanent basis. Sandbags protect the seams where the Tiger Dams meet the HESCO barriers.

Tiger Dams are billed as an Interim Flood Protection Measure. If they were installed throughout the city, it would take 72 to 96 hours to ready them for a storm. The more limited installation in Lower Manhattan took 48 hours. The work was done for the Office of Emergency Management by an outside contractor.

When Superstorm Sandy roared through New York City on Oct. 29, 2012, the Seaport was one of the places that was hardest hit. Next to the South Street Seaport Museum's 1885 cargo ship, Wavertree, is a sign showing the high water mark from Sandy. It was four feet above the level of the pavement.

Hurricane Isaias was not expected to roll in with that much water, but it was expected to bring stronger and more sustained winds than Sandy.

Deanne Criswell, the city's Commissioner of the Office of Emergency Management, said at a press conference on Aug. 3 that the city was expecting "only a moderate amount of storm surge"- somewhere between one and two feet - for which the Tiger Dam barriers would be protective. In addition, Criswell said, "We're expecting a large amount of rain and we know that we're going to have flooding citywide because of this rain." She said that much of the city would see two to four inches of rain, but in some areas there could be as much as six inches of rain.

The sustained winds were expected to be 35 to 50 miles per hour, with gusts of up to 70 miles per hour. Criswell said that the expectation was that the city would be subjected to fierce winds for from three to six hours. However, she said, that could change. "This storm has changed in intensity since we've been watching it," she said.

Tropical storm? Hurricane? Whatever Isaias was when it came ashore in The Battery at the southern end of Manhattan on Aug. 4, it was packing a lot of wind.

The storm took out 15 large, mature trees plus six ornamental trees and smaller, newly planted trees. Most of the damaged trees were London Plane trees. One elm tree went down as did three Kentucky Coffee trees and several crab apples.

One of the shade structures on the terrace behind SeaGlass Carousel was damaged as was a lamppost on the State Street side of the park.

Sean Kiely, Park Manager for The Battery Conservancy, speculated that the destructive force could have been a microburst. "The destruction was in a large diagonal path throughout the park," he said, "whereas other parts had only minimal damage."

There was no water damage, according to Kiely. "The water didn't even flood the lower promenade," he said.

What Kiely reported in The Battery was true throughout New York State. There was little, if any, water damage but the wind was fierce. It took down trees and ripped through power lines.

The day after the storm, Gov. Andrew Cuomo declared a state of emergency for 12 New York counties including all five boroughs of New York City. He also directed the New York National Guard to mobilize 50 soldiers with vehicles to help with ice and water distribution, storm response and clean-up in Putnam County.

Initially, there were 920,000 power outages in the state. The day after Isaias passed through, 703,191 New Yorkers still had no power.

Cuomo directed the Department of Public Service to launch an investigation into the responses by Verizon, PSEG Long Island, Con Edison, Central Hudson Gas & Electric, Orange and Rockland Utilities and New York State Electric & Gas to determine the cause of their failures.

If Cuomo was outraged the day after the storm - and he was - he was even more so as day after day passed leaving many New Yorkers with no power.

He said that among the utility companies, Con Edison and PSEG were doing the worst jobs in terms of recovery. "This is an old story at this point," Cuomo said. "There will be storms and the utility companies know that. I've spoken to them about this numerous times." He said that preparing for a storm and recovering from a storm are "essential services" provided by a utility. "ConEd and PSEG were not prepared," he said.

Cuomo added that depending on what the Public Service Commission finds when it investigates the outages, there could be fines, penalties and restitution required.

"I want the utilities to know that we do not abide by the concept in New York that anything is too big to fail," he said. "Your franchise can be revoked. I am not bluffing. I don't bluff."

He said that he would await the facts from the PSC investigation but added "This is not our first rodeo....This was entirely unacceptable."

As the Tropical Storm Isaias began to pass out of the New York area leaving a trail of strong winds, the sun set over the Hudson River and Jersey City. This photograph was taken from Tribeca on Aug. 4, 2020. (Photo: Terese Loeb Kreuzer) 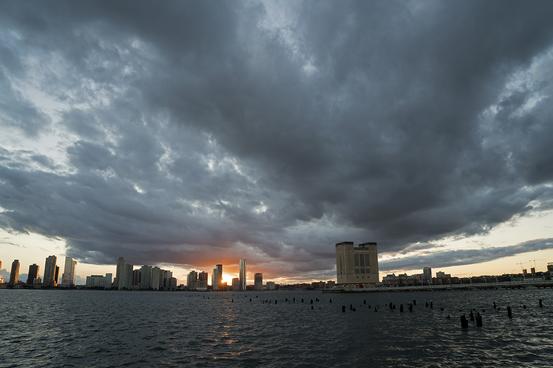 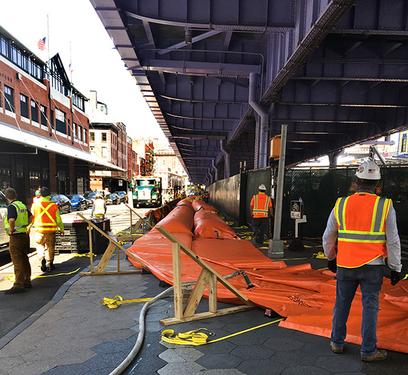 On Aug. 2 and Aug. 3, workmen installed almost a mile of Tiger Dams along South Street between Wall Street and Catherine Slip, near the Brooklyn Bridge. (Photo: Joanne Gorman)