Rachel Policar as Goldele and the ensemble in “The Golden Bride,” produced by the National Yiddish Theatre Folksbiene at the Museum of Jewish Heritage. (Photo: © Terese Loeb Kreuzer)

Cameron Johnson as Misha and Rachel Policar as Goldele in the National Yiddish Theatre Folksbiene’s production of “The Golden Bride,” a Yiddish operetta that premiered on the Lower East Side on Feb. 9, 1923. (Photo:  © Terese Loeb Kreuzer) 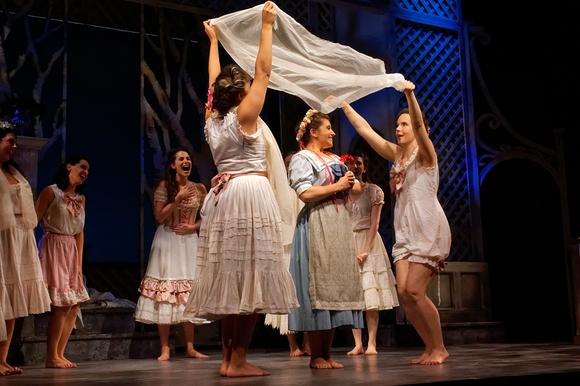 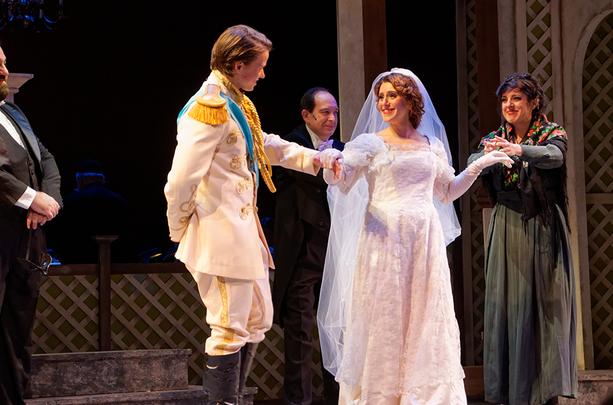 Broadway has yet another production of the wonderful and heartbreaking "Fiddler on the Roof," but Battery Park City has "The Golden Bride" ("Di Goldene Kale"), an authentic Yiddish operetta that premiered on Second Avenue (the "Yiddish Rialto") in February 1923 and has not been seen in a full-scale production since 1948. Some of the great actors of the time played on the Second Avenue stages. Even with significant competition, "The Golden Bride" was immensely popular and ran for 18 weeks in the 2,000-seat Second Avenue Theatre before going on the road to other U.S. cities and abroad.

The National Yiddish Theatre Folksbiene has revived "The Golden Bride" at the Museum of Jewish Heritage with a cast of 20 and a 14-piece orchestra conducted by Zalmen Mlotek, Folksbiene's artistic director. The operetta is sung in Yiddish with English and Russian titles above the stage.

Like "Fiddler," "The Golden Bride" revolves around the inhabitants of a Russian shtetl whose close-knit community endures many hardships. In "The Golden Bride," these are leavened by dreams of a good life in America ("Our friends from America,/From far away, will help us") which suddenly becomes a reality for one of their own -a poor girl named Goldele - whose estranged father has recently died in America and left her a fortune. Suddenly all the young men in town are after her, but she loves her childhood sweetheart, Misha, and he loves her. Nevertheless, she tells him that she must leave him and go to America. Abandoned by her mother when she was a child, Goldele tells her would-be lovers that she will marry the man who finds her beloved mother. And so the quest begins.

The program notes observe that members of the original audience would themselves have recently made the transition from Russia and Eastern Europe to America. "Yiddish operettas served to help these Jewish immigrants make meaning of their lives as strangers in this new land," say the notes.

"The Golden Bride" is creaky in places with oompah music and shtick, but when Rachel Policar shows up as Goldele and Cameron Johnson comes on stage as her bashert, who loves her rich or poor, their singing and acting make this period piece touching and memorable. Both Johnson and Policar are relatively young. ("The Golden Bride" marks Policar's off-Broadway debut). It will be interesting to see what else they do with themselves. They are ably supported by a strong cast, especially Jillian Gottlieb as Misha's sister, Khanele and Glenn Seven Allen as her suitor, Jerome.

Adam B. Shapiro as Kalmen with the ensemble in “The Golden Bride,” a Yiddish operetta that premiered in February 1923 and that has been revived by the National Yiddish Theatre Folksbiene. (Photos: © Terese Loeb Kreuzer) 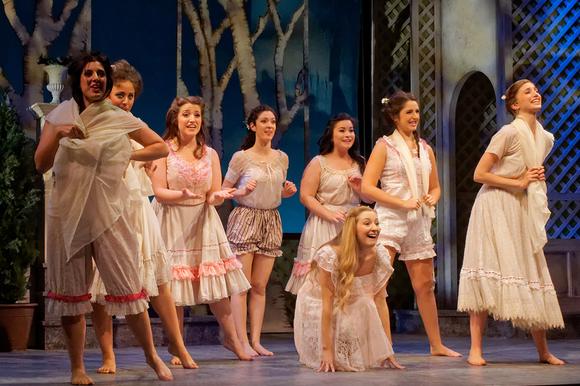 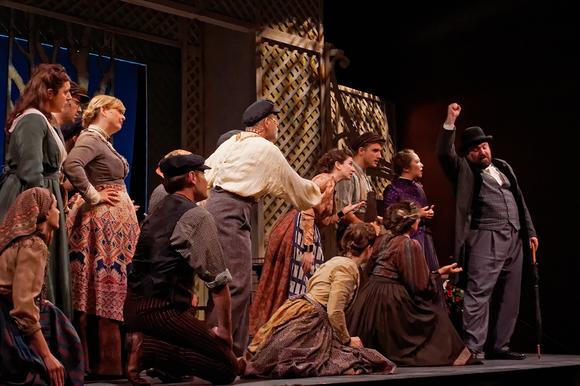 The young women of the shtetl in “The Golden Bride” sing about finding husbands.  (Photo: © Terese Loeb Kreuzer)

FOLKSBIENE'S 'THE GOLDEN BRIDE' AT THE MUSEUM OF JEWISH HERITAGE