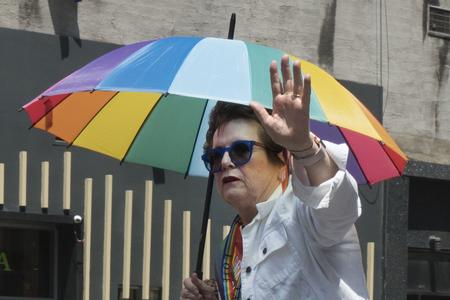 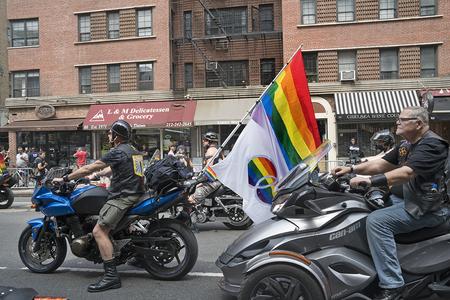 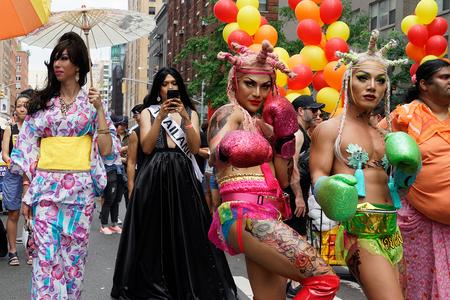 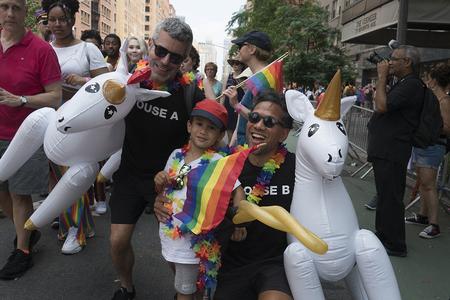 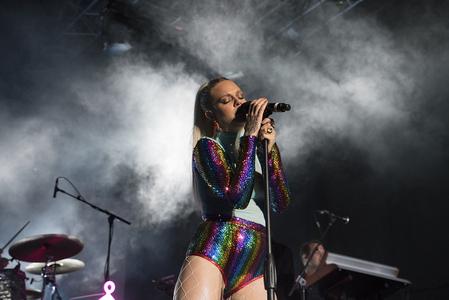 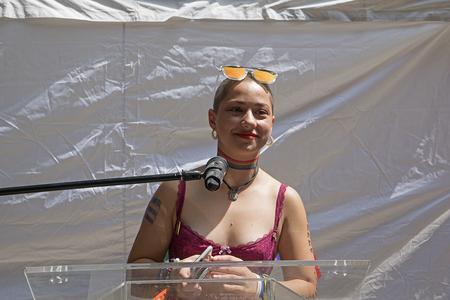 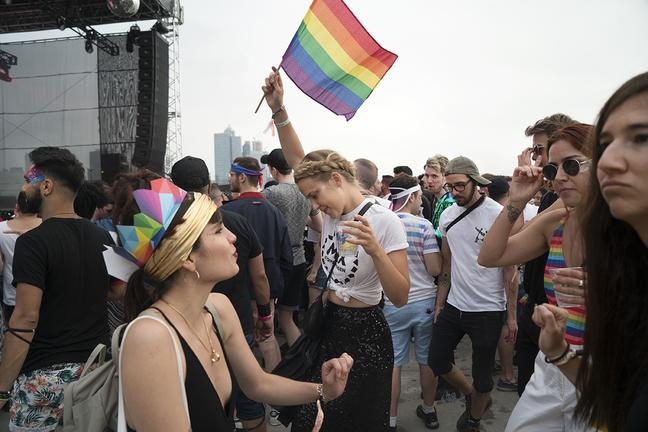 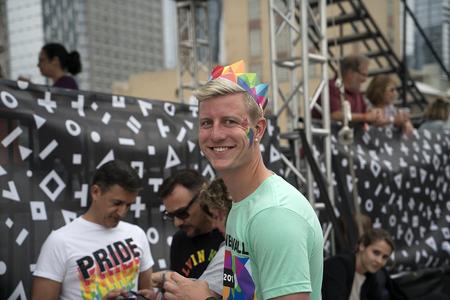 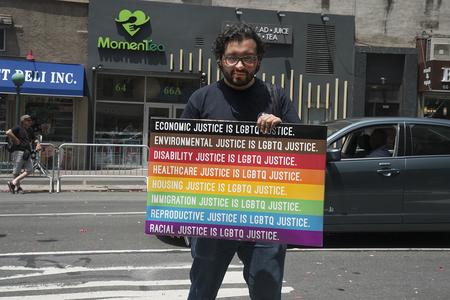 From more than a block away on the Hudson River Park Greenway, an insistent bass beat announced that I was close to Pier 97, the midtown Manhattan location of the two-day festival preceding and accompanying New York City’s annual Gay Pride Parade.

Barricades and guards stood at the entrance. No one could enter without a ticket or media credentials.

This was the second year for Pride Island, formerly known as Dance on the Pier and for more than 30 years located on a pier in Greenwich Village or Tribeca.

The huge pier was crowded, but not as crowded as it would be the next day when people would flock here following the Gay Pride Parade. On this warm, summer evening, the mood was upbeat and cheerful. Loudspeakers flanked a stage, blasting music. People were drinking and dancing and chatting and flirting. In the privacy of the guarded pier, all forms of dress and undress were acceptable.

Tickets for the pier cost as much or more than a prime seat for a Broadway show. Shortly before 9 p.m., Tove Lo, the Swedish pop singer/songwriter emerged from clouds of multi-colored mist on the LED-lit stage and strutted back and forth on a platform that extended into the crowd. She was wearing a see-through shirt with pasties covering her nipples and tight, spangled, rainbow-colored briefs. Her audience reached toward her with adoring hands.

Pride Island was the appetizer. The next day, June 24, was the 48th annual Gay Pride Parade — the culmination of 10 days of activities and events organized by Heritage of Pride.

Heritage of Pride (HOP) was founded in 1984, five years after the Stonewall riots, to take over the planning of NYC Pride events from the disbanded Christopher Street Liberation Day Committee, former organizer of the march and the rally. The first Gay Pride march took place on Christopher Street in Greenwich Village on June 28, 1970. By 1971, the march extended between Christopher Street and Central Park.

This caused howls of protest in some quarters as did the policy this year of obliging all marchers to wear wrist bands.

Reportedly, the new parade route was selected by the New York Police Department (NYPD) in consultation with HOP to make the parade shorter, although that didn’t work. The march started shortly after noon and ended around 9:15 p.m.

Perhaps the wristbands seemed desirable this year in a time of terrorism and hyper-vigilance. However, that is speculation. At any rate, the Resistance contingent didn’t like them, nor did they like the corporate presence in the parade, which they deemed excessive, detracting from the heart-felt, gut-wrenching protests that characterized the Gay Pride Parade in earlier years.

This year, there were more than 50,000 marchers from 484 groups registered to participate in the parade. Almost two-thirds of the groups were from non-profit organizations, according to James Fallarino, media director for HOP. Fallarino said that the corporate presence was necessary. “Over the course of 10 days, HOP produced 17 events all over New York City,” he said, “and in order to pull off such a massive operation, we rely on the support of a number of corporate sponsors.”

The day of the parade was hot and humid — typical New York City summer weather — but that didn’t deter millions of spectators from lining the streets along the parade route, waving rainbow flags. And the millions of spectators brought out the local elected officials, some of whom marched with their families along with their colleagues and supporters.

Given Cynthia Nixon’s obvious Gay Pride creds, Cuomo had to do something extra to express his support for the movement, and he did.  On the day of the parade, he and other elected officials unveiled New York City’s first official memorial dedicated to the LGBTQ community. It’s in Hudson River Park, roughly between West 12th Street and Bethune Street and honors those lost in the Orlando Pulse nightclub shooting in June 2016 and “all victims of hate, intolerance and violence.”

Anyone seeking political passion and righteous anger in the 2018 Gay Pride Parade would not have had to look hard. Amid the colorful corporate floats were people carrying signs, some of them homemade. “Twelve transgender people have been killed in 2018,” said a sign carried by one marcher. “This needs to stop.” “Bigender people are valid,” said another sign. The contingent from Lambda Legal carried signs with a picture of Trump and the word “sued” plastered over his face. A sign carried by another marcher had words superimposed over the colors of the rainbow flag. “Economic justice is LGBTQ justice,” it said, followed by environmental, disability, health care, housing, immigration, reproductive justice and racial justice — all forms of LGBTQ justice.

Some of the marchers expressed their views by their choice of T-shirts. One man wore a T-shirt bearing the message “This is My America. All people are equal, Love wins, Black Lives matter, Immigrants and refugees welcome, Celebrate diversity and respect disability, Women control their bodies.” Another man was wearing a T-shirt with a picture of U.S. Supreme Court Justice Ruth Bader Ginsburg.

But beyond signage and T-shirts, political passion was expressed in how the marchers presented themselves in this parade, with their husbands and wives of varying genders, with their children, in exotic and flamboyant clothing that revealed their inner selves, in no clothing except for the minimum required to walk through the streets of New York without getting arrested.

Kenita Placide, one of the grand marshals of the parade and a human rights, HIV and LGBT activist from St. Lucia commented before the parade that in the Caribbean, Pride marches are not permitted. “It gives a joy to know that there are people in different places making progress,” she said. “Trinidad is having a month of Pride events, so although they can’t necessarily march, they are doing something to celebrate. We are also seeing things happening in Belize, in Curaçao, in Surinam.”

Some of the silenced LGBTQ people of the world were represented in the parade, too. Among them, there were marchers from Nigeria and from the Middle East, bringing their messages of repression to New York City.

Since the Stonewall riots of June 1969, same sex marriage laws have been passed, however equal protection in housing, employment and public accommodation is still elusive. President Donald Trump broke from tradition by failing to recognize June as LGBT Pride Month. Vice President Mike Pence opposes marriage except between a man and a woman. The U.S. Supreme Court ruled that a baker was within his rights to refuse to bake a wedding cake for a gay couple.

Billie Jean King, one of the grand marshals of this year’s parade, will be 75 years old in November. In remarks before the parade started, she said that she remembers the time before Stonewall.

“The annual Pride march is a reminder of how important it is for each of us to have the opportunity and the ability to live our lives with honesty and to be our complete selves in everything we do at home, at work and in the community,” she said. “It hasn’t always been that way and it is never easy. … We stand on the shoulders of others who came before us and to keep the values and ideals of the Pride march alive. Future generations will look to us for inspiration. …I will leave you with a quote from Coretta Scott King. ‘Freedom is never really won. You earn it and you win it with every generation.’”