PIER 17 IN THE SOUTH STREET SEAPORT WILL OPEN THIS SUMMER

For more than five years, Pier 17 in the South Street Seaport has been an object of contention and curiosity. On March 20, 2013, New York City Council approved The Howard Hughes Corporation's plans to tear down the existing structure on the pier and erect a new building, swathed in glass.

Now that building is about to open. On April 19, Saul Scherl, president of the New York Tri-State Region of The Howard Hughes Corporation, led a tour of the building for residents of Lower Manhattan and members of Community Board 1.

Pier 17 was designed by SHoP Architects with extensive use of glass to maximize waterfront views and admit light. There are approximately 212,000 square feet of space in the building, which, at the moment, is only partially leased.

On the two lower levels of the four-story pier building are six two-story structures that HHC refers to as the "Pier Village." Each of the village "boxes" as HHC calls them, can encompass a business or a part of a business. They range in size from five "boxes" of 5,500 square feet to one "box" of 18,000 square feet.

Three of the boxes have been leased to high-end restaurateurs Andrew Carmellini, David Chang of the Momofuku Group and Jean-Georges Vongerichten. Jean-Georges plans to open in the fall of 2018, followed by David Chang late in 2018 and Carmellini in 2019.

Howard Hughes is in the process of negotiating leases for the 18,000 square foot "box" and, according to HHC, "will share additional details as they become available."

The roof of Pier 17 will be the first part of the building to open. It is approximately one and a half acres in size, with views of the Brooklyn Bridge to the north, Governors Island to the south and much of Lower Manhattan.

Concerts will be staged on the roof with the Brooklyn Bridge as the backdrop for the stage. The programming for the inaugural season will be announced on May 7 with Live Nation as the exclusive booking partner.

Although the stage area will be shielded by temporary structures designed by German architect Achim Menges, the rooftop itself will be open to wind and weather. Artificial turf will be rolled out over part of the paving and will be in place subject to weather conditions and the events scheduled on the roof.

The Uniform Land Use Review Procedure (ULURP) application that City Council approved in March 2013 specified that portions of the rooftop must be made available without charge to community-based organizations, up to four times a year. In addition, the ULURP said that the public must be guaranteed free access to the pier at all times.

Although HHC plans to stage concerts on the roof for up to 3,400 people at a time (standing) or 2,400 people seated, HHC says that the public can use the roof when it is not being used for an event. An area of approximately 10,000 square feet on the western portion of the rooftop will be open to the public at all times, including during concerts.

The rooftop is very windy, which will have an impact on what kind of movable seating can safely be installed. At the moment, there are some heavy lounge chairs and benches on the roof.

A small restaurant on the roof, no reservations accepted, will be able to accommodate up to 61 people seated inside and up to 260 people outside on the north and south patios. The menu is still under development.

Three escalators plus elevators provide access to the third and fourth stories of the pier building and to the rooftop. People attending events on the roof will pass through the north side of the pier, which HHC calls the "Riverdeck." It overlooks the East River and the Brooklyn Bridge and will be open to the public most of the time. It has been furnished with benches and gliders designed by James Corner Field Operations and SHoP Architects.

The Riverdeck will be one of the first parts of the pier to open to the public this summer, along with the rooftop.

The ULURP for Pier 17 approved by City Council in March 2013 specified that the plans for the pier, as presented, had to be redesigned to accommodate maritime uses. A new plan had to be submitted to City Council no later than June 30, 2013.

According to Saul Scherl, docking on the north side of the pier is not currently planned. The Howard Hughes Corporation is talking with boat operators about docking opportunities on the eastern and southern flanks of the pier. In addition, there is a notch in the middle of the pier that Scherl said might be able to be utilized to accommodate boats docking on its eastern flank.

At the time that City Council signed off on the ULURP for Pier 17, The Howard Hughes Corporation had a 60-year-long lease on the pier and on parts of the South Street Seaport. The New York City Economic Development Corporation (EDC), acting as the landlord for the HHC premises in the Seaport, negotiated a deal with HHC whereby Hughes was paying $3.64 a square foot to lease Seaport real estate with a 3 percent escalation clause and no rent due until the pier opened.

According to a report prepared by the Real Estate Board of New York in the spring of 2016, the average asking rent for ground floor space in the Financial District was $326 per square foot as of April 1, 2016.

When the March 2013 ULURP was approved, HHC estimated the cost of reconstructing the mall on Pier 17 at $200 million based on using the pier's existing pilings. Not long after beginning the demolition of the old mall, HHC announced that it was going to have to tear out the old pilings and replace them. This may explain, in part, why HHC's investment in the South Street Seaport is now pegged at $785 million including both Pier 17 and other properties in the Seaport uplands. That is not an apples to apples comparison with the estimated $200 million for the pier alone, but it does indicate that construction delays and changes to the plans for the pier have been costly. However, given the vast difference between what HHC is paying to lease space in the South Street Seaport and what it can command in rentals, even escalating costs and thousands of square feet of unleased space have probably not cost HHC management too many sleepless nights.

While construction proceeds all around it, the sports TV network, ESPN, moved into Pier 17 in early April. ESPN has leased approximately 19,000 square feet of space for its first Seaport District studio where it produces a new morning program called "Get Up."

Eventually, ESPN will have additional studios in Pier 17. Studio 2, which is still under construction, will be joined by a hybrid radio/social media/ digital content studio that's still in development.

ESPN chose to move to Pier 17 in part because of the views of the Brooklyn Bridge, the Statue of Liberty, the East River and the city skyline, which can be used for atmospheric backdrops to programming. Studio 1 has seven cameras, but in addition, ESPN crews can walk out into the Seaport neighborhood or shoot from Pier 17's roof.

"The flexible spaces, both indoor and outdoor, allow us to take advantage of all that New York City has to offer," said Connor Schell, executive vice president for content at ESPN.

The stage on the roof of Pier 17 will be on the north side, with the Brooklyn Bridge as a backdrop. The Howard Hughes Corporation has said that the roof will be used for concerts, but HHC has also said that it will be used for art installations, fashion shows, cultural performances, sports events and movie screenings as well as for private events. HHC says that it "will provide additional information as programming develops." 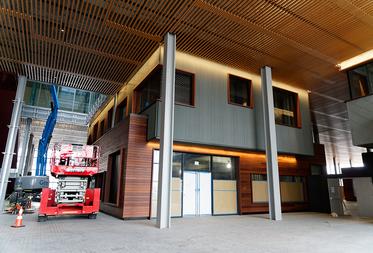 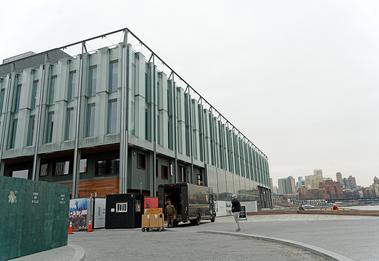 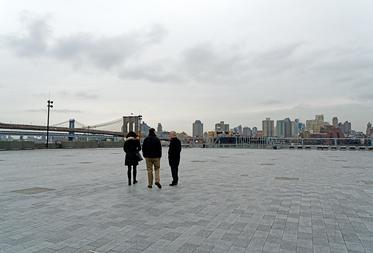 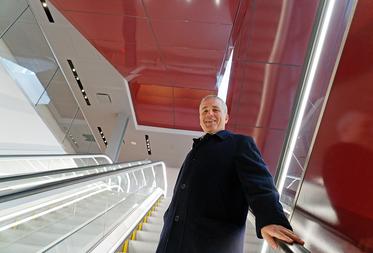 There are approximately 60,000 gross square feet of unleased space on the fourth floor of Pier 17. 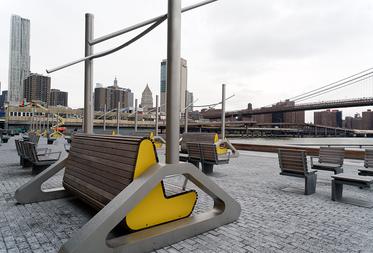 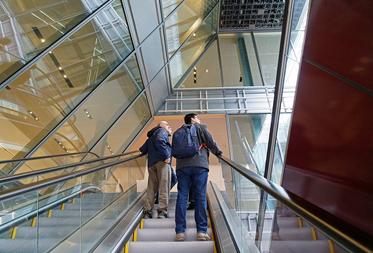 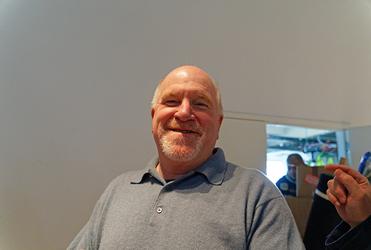 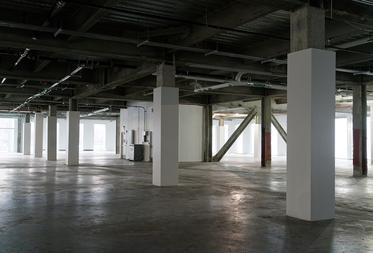 On Feb. 20, 2018, The Howard Hughes Corporation made a presentation to Community Board 1 showing the configuration of Pier 17's rooftop, with the stage on the north side. 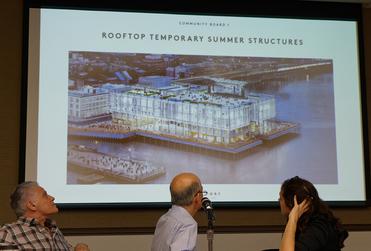