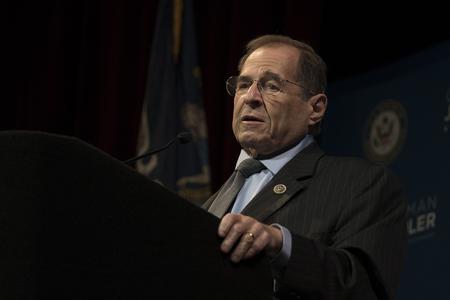 Rep. Nadler began his career in public service in 1976 in the New York State Assembly. Representing the Upper West Side, he served as a Democratic Assemblyman for 16 years. In 1992, Rep. Nadler was elected to the U.S. House of Representatives in a special election and has served in Congress ever since. He was re-elected to his thirteenth full term in 2016, receiving 78% of the vote.

On Oct. 9, 2018, Rep. Nadler spoke at a Town Hall meeting held at the Borough of Manhattan Community College. Following are notes from what he said at that two-hour meeting, which consisted of prepared remarks followed by a question-and-answer period.

I’m concerned about how little oversight the Congress has exercised. The Constitution designed a system of checks and balances. The Congress is supposed to be a check and balance on the executive and have oversight over it, and vice versa. But we have not been doing that much at all.

The sultan of something or other presented George Washington with a horse. George Washington went to Congress and said, ‘What should I do with the horse?’ And they said, ‘Give it to the Department of Agriculture’ or whatever the department was then.

President Jefferson was presented by another sultan with a magnificent ceremonial sword. And he went to Congress and they said, ‘Put it in the Smithsonian.’

President Trump, by virtue of the fact that he has large business interests in various foreign countries as well as in the United States, and unlike previous presidents has not divested himself of those interests or put them in blind trusts, inherently violates the emoluments clause every day.

President Trump has huge business interests. He is violating the emoluments clause every day.

It’s part of the culture of corruption.

You look at the different agencies – far more than normal – they’re hiring people from industries they’re supposed to regulate. Here, in agency after agency, from the EPA [Environmental Protection Agency] hiring people from the major polluting firms, to the EPA refusing to acknowledge climate change, which is one of the great risks we have, and perhaps the greatest, to the various agencies overturning prior decisions and saying we’re not going to help students repay their student loans – we’re going to get higher interest rates from banks – we’re going to ease the various restraints that were put into place on the banks by the Dodd-Frank law in the aftermath of the 2008 recession and the crash that led to about 20 trillion dollars in lost evaluation of people’s homes and other things – it’s good for the banks and it’s good for the lobbyists and it increases the chance for another such crash – so what? And this is being done by the people who will go right back to the banks after they finish their service in the regulatory agencies.

All of this should be investigated and brought to light by Congress and maybe develop a corrective but the current Congress is refusing to do this.

We also should be looking into the Department of Justice decision to reverse its course on the Affordable Care Act. A number of Republican Attorneys General have brought a lawsuit against the Affordable Care Act and it is normally the duty of the administration – of whatever administration – to defend the constitutionality of laws duly passed by Congress and signed by the President. In extraordinary circumstances, maybe they would say they won’t – but here the administration not only said they wouldn’t. They changed sides and say it’s unconstitutional. For an administration to say that a law passed by Congress and signed by the President is unconstitutional is extraordinary. If they were to win this lawsuit – God forbid – this would strip around 100 million Americans of health coverage for pre-existing conditions.

(If this were to happen, not only people who bought insurance on the exchanges set up by the ACA but everyone with insurance, regardless of the source, would be affected.)

We should also be looking at the administration’s policies of separating children from their parents at the border – holding young boys and girls in cages with no plan to reunite them with their families. We now see that they deported the parents after having seized the kids, making no provision for keeping track of them. It may be that there are now children who will never be reunited with their families.

(Nadler says that the administration had “no interest” in keeping track of these children and their families.)

There’s a systematic and concerted effort to chip away at voting rights, particularly in African-American and Hispanic communities, but also older people. You see states passing restrictions – suddenly no more early voting. Suddenly you’re reducing the number of polling places especially in lower income and minority neighborhoods, suddenly you’re required to have photo IDs which you can only get with a birth certificate. A large number of people in the South and on Indian reservations never had birth certificates.

Now we just had, I don’t need to tell you, a bruising battle for confirmation of a Supreme Court justice. This is [subversive] on a number of levels. This is the culmination of an attempt, going back for decades, of the right-wing to take control of the Supreme Court and the fact that Mitch McConnell in the Senate refused to let Senators even consider the nomination of Merrick Garland by President Obama (inaudible)….

When it comes to abortion, they’re very clear. They’re opposed to it. And Susan Collins’s willful ignorance notwithstanding, anyone who’s looked at Justice Kavanaugh’s record can predict absolutely, not that he will overturn Roe v. Wade, but that he will destroy it.

(An even more alarming prospect, according to Nadler is that some state legislatures and the House of Representatives have passed legislation saying that the fetus is a person within the meaning of the 14th amendment.) The 14th amendment says that no person shall be deprived of life, liberty or property without due process of law. Well, if a fetus is a person, then abortion is unconstitutional even if a state wants to permit it. Maybe there would be an exception to save the life of the mother, but maybe not. I think it unlikely but I wouldn’t put it beyond the realm of possibility.

It was designed to be a shield, not a sword.

The Affordable Care Act says that insurance has to cover everyone for a list of basic services, including contraception. But what if the employer says, “My sincerely held religious belief is that contraception is wrong and I don’t want to cover contraception in any insurance that I give out.” The courts held that they could basically get away with that.

Now what if the employer said, “I’m a Christian Scientist, and I don’t want to cover blood transfusions?” Or “I have a sincerely held religious belief against serving gay people in my store or my restaurant.”

This is how you can use religious beliefs, which may or may not be sincere, to discriminate against other people.

As I said, religious beliefs should be respected but as a shield and not as a sword.