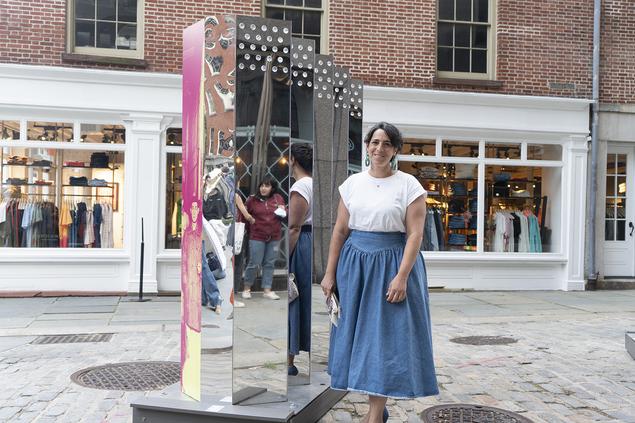 River to River Festival in the South Street Seaport

Rose DeSiano is both a photographer and a sculptor. As part of this year's River to River Festival sponsored by the Lower Manhattan Cultural Council (LMCC) three of her "Lenticular Histories" were installed on Little Water Street between Fulton and Beekman Streets and another three on Front Street between John and Fulton Streets.

What's a "Lenticular History?" you may ask. "Lenticular" means "relating to the lens of the eye" and "history?" Well, you know what that is. It's something that happened in the past. DeSiano's sculptures, consisting of historic photographs and mirrors affixed to accordion-like structures that stand about 10 feet above the Seaport's cobblestoned streets marry the past and the present. The mirrors reflect their surroundings, including people who pass by and maybe pause to have a look at what DeSiano created. Time and history get swirled into a mixture of past and present. In the South Street Seaport, the past is a particularly potent presence. Schermerhorn Row dates from 1811. Other buildings in the Seaport that form a backdrop for DeSiano's work once served as 19th-century warehouses and counting houses.

Many of the historic photographs that DeSiano used to create this work came from the archives of the South Street Seaport Museum. For more information about the photographs, click here. 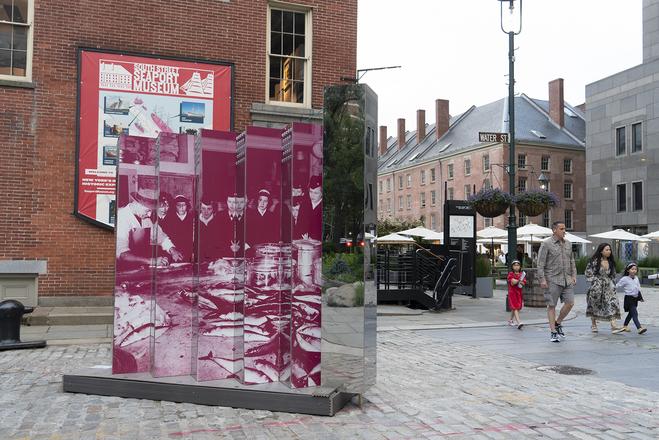 Some of Rose DeSiano's "Lenticular Histories." These were positioned on Little Water Street in the South Street Seaport.

Rose DeSiano with one of her "Lenticular History" installations. This one was on Front Street between Fulton and John Streets in the South Street Seaport.
(Photos: © Terese Loeb Kreuzer) 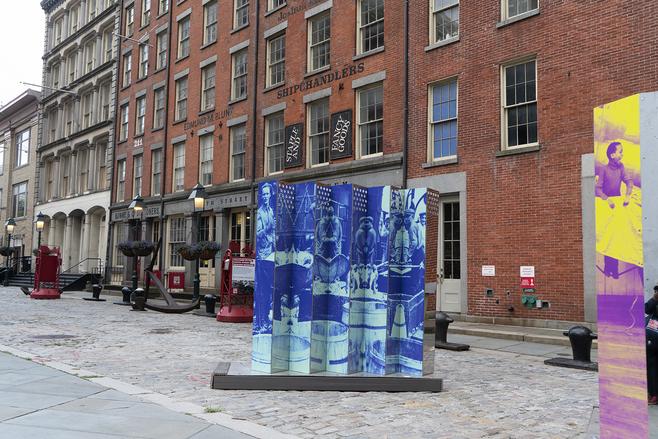