For Warrie Price, president of The Battery Conservancy, Aug. 19 was a day of triumph. After more than 10 years of fundraising, design, production and a setback named "Sandy," the SeaGlass Carousel in The Battery was about to open. Price called it a "historic moment."

The SeaGlass Carousel in the 25-acre park at the southern end of Manhattan is like no other in the world and that's the way Price likes it. Nothing ordinary would do. Its design references the New York Aquarium that once 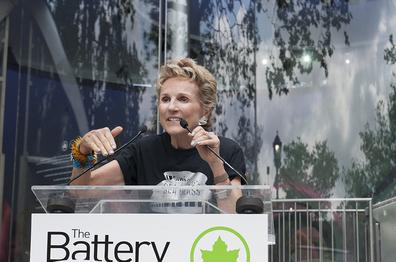 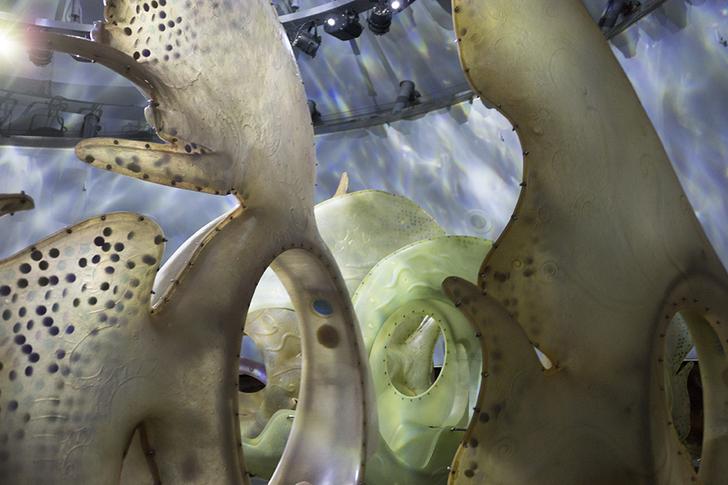 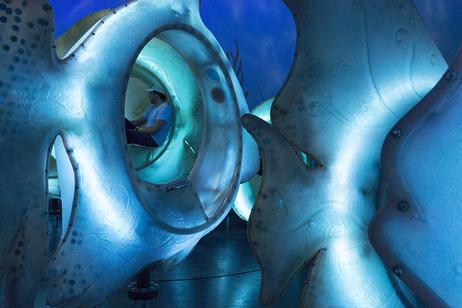 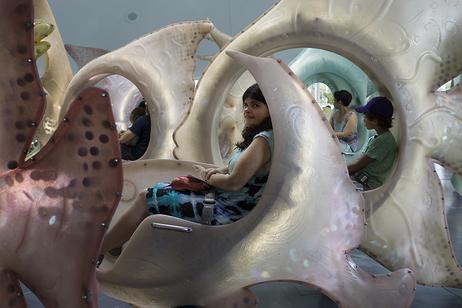 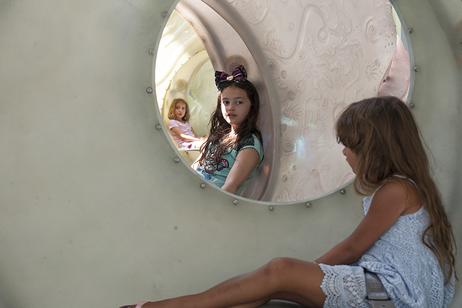 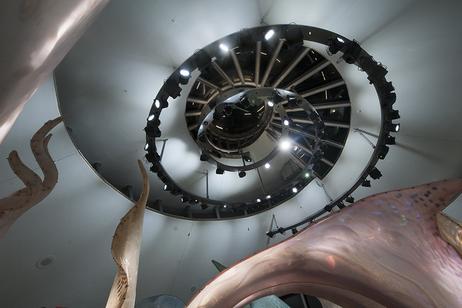 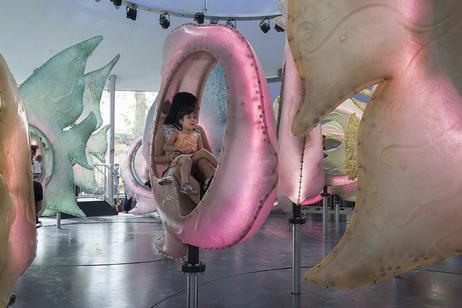 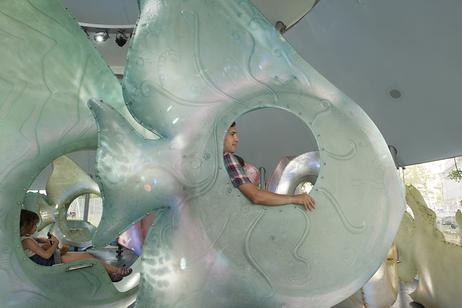 occupied Castle Clinton, the landmarked fort in the park, not far from where the carousel now stands. Working with the city, state, and federal governments and with members of the private sector, Price created the Battery Conservancy 21 years ago to help rebuild the Battery and Castle Clinton National Monument, which were run down and not in Price's view, commensurate with their historic importance. The opening of SeaGlass is a milestone in that journey of rehabilitation.

Price expects that the carousel will draw visitors from all over New York City and all over the world. "This will be good for lower Manhattan!" she said exuberantly.

The carousel building mimics the spiral shape of a chambered nautilus shell. Inside are 30 giant, luminescent fish that glow and sparkle. They are mounted on four separate turntables, enabling them to undulate as though they were swimming in an unseen current. Eighteen of the fish move vertically as well as horizontally.

Riders climb aboard a fish, strap themselves in and then are immersed in a sound/light show that suggests a tropical sea. At first, the fish grow dark as they would during a descent into the sea. Then the lights brighten and the fish swirl in changing rainbow hues, as they would swirl around a snorkeler or diver in tropical water. Images of water eddy over the carousel's ceiling. This peaceful, underwater world is accompanied by classical music. Then the lights begin to brighten as they do toward the surface of clear, tropical water and soon the trip is over. Too soon. The voyage takes three and a half minutes. Price called it "magic," and it is.

The carousel that emerged after more than a decade of work had its genesis in a brief conversation.
Price was talking to Claire Weisz, a partner in WXY, an architecture and urban design firm, and said that the lower part of The Battery was kind of dark. "What about a merry go-round?" said Weisz. "Downtown never had one."

The carousel cost $16 million. Half of the money came from the government and half was raised privately. Donors stepped up to sponsor the fish at a cost of $100,000 each. Nine of the fish are still unsponsored, and Price is continuing to fund raise.

The dramatic fish, some of them more than 13 feet tall, were designed by the George Tsypin
Opera Factory. Tsypin's designs have appeared on the stages of the world's leading opera companies, and on Broadway. He was the artistic director and production designer for the opening ceremony of the Olympic Games in Sochi in 2014.

"A traditional carousel is brilliant in its simplicity," Tsypin said, "but we have new technology." He said that the SeaGlass Carousel is "not a static object. There will be new music and new lights. You can program the movements in different ways." He called the carousel "a living organism."

The fish were fabricated at Show Canada in Montreal, whose handiwork can also be seen in Cirque du Soleil's fantastical productions. Each fish is outfitted with four speakers through which classical music is piped. The sound tracks were devised by SiriusXM composer  Teddy Zambetti, each with an accompanying - and different - light show created by Kyle Chepulis of Technical Artistry.

The carousel is surrounded by woodland gardens that were designed by the master Dutch landscape architect, Piet Oudolf, and funded by a $1 million grant from the Tiffany & Co. Foundation. Oudolf uses plants that will flourish in a harsh marine environment and that will look interesting at any time of the year. The Tiffany gardens are planted with 9,000 perennials and 78,000 bulbs that promise to provide their own magic come springtime

Due to popular demand, the Battery Conservancy has extended operating hours for SeaGlass Carousel. From Monday, Dec. 21, through Saturday, Jan. 2, SeaGlass will be open 10 a.m. - 10 p.m. In January and February, SeaGlass will be open on Saturdays and Sundays, 10 a.m. - 6 p.m., weather permitting. SeaGlass will also be open on Monday, Jan. 18 (Martin Luther King, Jr. Day), and Presidents' Week, Feb. 15-19. For updates on changes to operating hours, follow The Battery Conservancy on Twitter and Facebook.

Each ride costs $5. On the first day that the carousel was open to the public, it would have taken at least an hour in line to get a chance to ride. Now, expect no more than a 15-minute wait to climb aboard. At the moment, no reservations are available, but that might change.

THE BATTERY'S SEAGLASS CAROUSEL OPENS TO CROWDS AND ADULATION