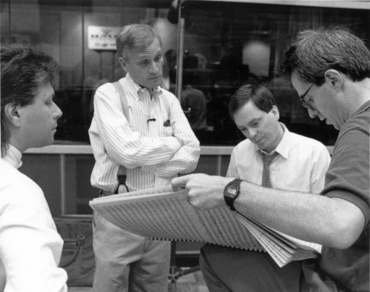 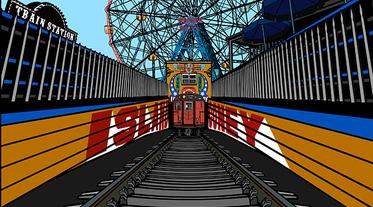 As usual, the annual Tribeca Film Festival, now in its last week, is loaded with stories that take place in New York City. It's fun to see familiar places on the screen and also to see New Yorkers, both familiar and unfamiliar, do their New York thing. There's still time before the festival closes on April 29 to take some of this in. Here are some suggestions:

Howard: If you've lived in New York City long enough and had any interest in theater, you might remember the hole-in-the-wall, off-off Broadway theaters of the 1970's. That's where Howard Ashman, the creative mind and the lyricist behind such Disney classics as "Beauty and the Beast" and "The Little Mermaid" got his start.

After college, he helped found the WPA Theater in a derelict section of New York, living on air and crumbs until his adaptation of Roger Corman's film "The Little Shop of Horrors" brought him fame and a bank account. This success was followed by the failure of a Broadway musical, "Smile," on which Ashman collaborated with Marvin Hamlisch.

Ashman fled to Los Angeles to lick his wounds. There he found a haven in the Disney Studios, with its numerous experts in animation who were still new to developing animated musicals. Ashman invited his New York song-writing partner, Alan Menken, to join him in L.A. Their first collaboration for Disney resulted in the Oscar-winning score and songs for "The Little Mermaid."

"Howard," the film, was directed by Don Hahn, who worked with Ashman at Disney. Despite the use of a lot of old, grainy photographs and the lack of fancy camerawork, the result is interesting and ultimately moving. Ashman both triumphs in Hollywood and simultaneously succumbs to AIDS. He died in March 1991 at the age of 39. That is something else that those who have lived in New York City long enough may remember - when the AIDS epidemic, then without a cure, picked off creative people left and right in the prime of their lives.

"I wanted Howard, one of the great storytellers of our time, to tell his own story in his own words," Hahn says of his film. "I wanted to celebrate his talent and understand the pain of his AIDS diagnosis to the people closest to him. I wanted to bring Howard back to life through his words and music, at least for 90 minutes, to testify to his genius and let an audience draw the conclusion that I drew nearly three decades ago: that this one man revolutionized the musical through his off-off Broadway hits and then through his work at Disney."

Alan Menken wrote the score for this film, dedicated to his colleague and dear friend, Howard Ashman.

Saul's 108th Story: Yikes! This is a charming film about how a Brooklyn teenager named Saul Moroz got into the glass installation business in New York City, where there's plenty of glass to install. The film starts with Saul, now an old man, describing something that happened to him in the summer of 1950. He thought he was going to spend the summer hanging out with friends, but a friend's father said, "Tomorrow, I'm taking you to work!" And what work that turned out to be! Not to spoil the story, but it had to do with the Empire State Building and his friend's father's oft-repeated expression, "Don't worry about it!" The film includes a graphic that says, "Workplace Safety Standards in the 1950s. An introduction."

Enough said. See the film, which was written and directed by Joshua Carlon.

I Heart New York: Someone (unseen and unknown) must have posed a question: "What's your first memory of New York?" and "Where did you grow up?" Apparently, we are in the midst of a conversation.

This short film begins with a glimpse of Manhattan, looking down on it from the north accompanied by the sound of a train rumbling along the subway tracks and then by an old man's voice answering the questions that we didn't hear: "My first memory of New York - I grew up in the Bronx. The neighborhood was full of immigrants from Europe fleeing Nazis and fleeing the Holocaust. They came here with the sense that this was a land of opportunity, that you could lead a full life and you could raise your children better."

The old man is not identified. In fact, his face is not even shown until almost the end of the film, but he quickly lets us know that he loves New York. "It's a city that ultimately cannot be anticipated," he says. And then he remembers the time around 40 years ago when the city was on the verge of bankruptcy and in despair and he was asked to come up with a logo to increase tourism and boost morale. In the back of a taxi cab, he made a sketch on a piece of paper: A heart symbol preceded by the word "I" and followed by "New York."

The designer thought his little idea might have a life span of a couple of weeks. Instead, it became an icon. "Once it started, it just spread all over the world," he says. "It worked because it was a real expression of people's feelings."

Finally, we see the man's face. It is Milton Glaser, designer not only of the "I Heart NY" logo but of the psychedelic Bob Dylan poster that has sold millions of copies and of hundreds of other posters - Glaser, the co-founder of New York Magazine. Glaser - whose work is in museums all over the world and on items such as T-shirts and coffee cups that people use in their daily lives.

The "I Heart NY" film was masterfully directed by Andre Andreev, who is based in New York City but who, like Glaser, is an immigrant. Andreev came from Bulgaria, where his mother managed a movie theater and his father worked as a graphic designer. This background must have helped give Andreev the chops to create this film about the master designer, Glaser. The film is short but it's a gem.

Both "Saul's 108th Story" and "I Heart New York" are part of a program of short films showing at these places and times:

Brooklyn Breeze: Cute! Take the subway and leave Manhattan behind! See the Cyclone! The parachute jump! The Wonder Wheel! The dancing water towers! The El! And much,  much more! "Brooklyn Breeze" is a four-minute-long animated film, directed and written by Alex Budovsky that recalls some of Brooklyn's iconic spots and others not often seen by visitors. Budovsky's Brooklyn is set against music of the 1920's and early '30's recorded by New York-based Michael Arenella and his Dreamland Orchestra.

Part of a program of animated short films curated by Whoopi Goldberg.

For tickets to the Tribeca Film Festival, click here.

From "Brooklyn Breeze." By Alex Budovsky 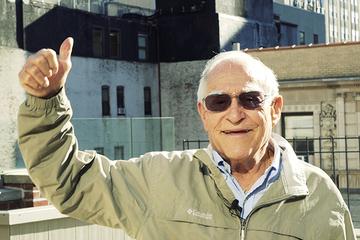 Novelty license plate with the I Heart NY symbol photographed in Times Square.
(From I HEART NY)