The South Street Seaport and areas just to the north are now gussied up with boutiques, restaurants, pricey condominiums and glittering high-rise buildings, but around 160 years ago, what was the Fourth Ward of Manhattan was not for the faint-hearted.

The walls can't talk, but the South Street Seaport Museum's historian, William Roka, can. He leads a tour called "Sex, Liquor and Murder" - a walking tour of New York City's "wickedest ward." The daytime version of this tour glosses over a few things. The Friday night special, which starts at 6:30 p.m. to provide the proper noirish atmosphere for what Roka plans to describe, has some information that is not for the squeamish.

The Fourth Ward extended roughly from where the Municipal Building is today to the East River waterfront. It took in Spruce, Ferry and Catherine Streets, Peck Slip and Park Row. Within these diminutive confines there were 500 drinking establishments with more than 45 brothels on Water Street alone.

Sailors in port with some money in their pockets could always find some action. If they chose to head to John Allen's Dance Hall, for instance, at 304 Water St. (now, alas, demolished to make room for the Brooklyn Bridge), they could find dancing prostitutes and cheap rum. The three-story building was equipped with several dance floors, an orchestra pit and booths for sex. Allen lived upstairs with his wife, his seven daughters, and his son, Chester, so that he could keep an eye on things - which he did, except for when he was in the pokey. He was arrested 113 times for running "disorderly houses" in various parts of the city.

Allen might have been dubbed the "wickedest man" in the wicked Fourth Ward had he not had plenty of competition. There was Kit Burns, for instance, who was also a family man and who lived and worked at 273 Water St. That house has not been demolished and is, in fact, the third oldest building in Manhattan. It was built by Capt. Joseph Rose and dates from 1773.

Burns had a bar on the first floor of the house and lived on the second floor with his wife, his daughter, his son-in-law and his dogs. Behind the bar a passageway led to a square-shaped room with benches in tiers surrounding a pit. This is where Burns staged fights between his dogs, weasels and rats, which, of course, were in ample supply, this being the waterfront. When his favorite dogs died, Burns stuffed them and kept them in the bar.

If this were not entertainment enough, Burns' son-in-law had a riveting specialty. If you paid him a quarter, he would dangle a rat by its tail and bite off its head.

Roka enlivens his narrative of the wickedest ward with these and other stories about such  characters as Gallus Mag, the six-foot-tall bouncer whose teeth were filed to a point, and who packed a pistol. She worked at the Hole in the Wall bar, where she kept unruly guests in order by biting off their ears and fingers. This saloon at 279 Water St., now the Bridge Café, is where Slobbery Jim killed Patsy the Barber over a disagreement about 12 cents that they had previously stolen from a German immigrant in the Battery.

Gallus Mag's rival, Sadie the Goat, used to hang out at the Hole in the Wall, when she was in town. Although the relationship between Gallus Mag and Sadie the Goat had started out on the wrong foot - Gallus Mag bit Sadie's ear off - eventually they reached an understanding, perhaps based on mutual admiration. In between visits to Water Street, Sadie worked as a river pirate, shanghaiing sailors, which was a lucrative business in the Fourth Ward.

Today's South Street Seaport promises an "entertainment experience," but it's nothing like the good old days. Sign up for Roka's walking tour, and he'll fill you in.

The next "Sex, Liquor and Murder" walking tour takes place on Friday, Oct. 27 starting at 6:30 p.m. It leaves from the South Street Seaport Museum at 12 Fulton St. Reservations are required. To reserve, click here. Tickets are $35 with discounts for museum members. 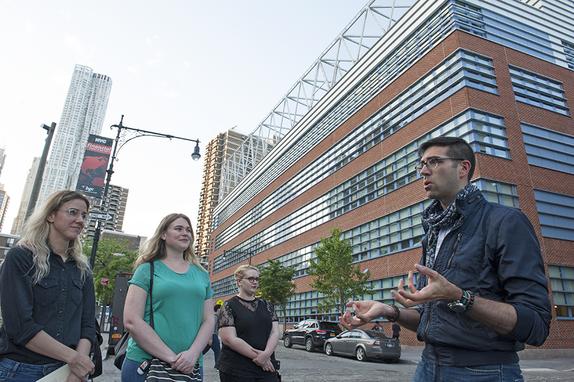 William Roka, the South Street Seaport Museum's historian, leading a walking tour of Ward 4, known as New York City's "wickedest ward." The red building, which houses the Bridge Cafe, dates from 1784 and is the fourth oldest building in Manhattan. The doorway behind Roka would have been part of a boarding house where sailors could sleep when they came ashore.  (Photos: Terese Loeb Kreuzer) 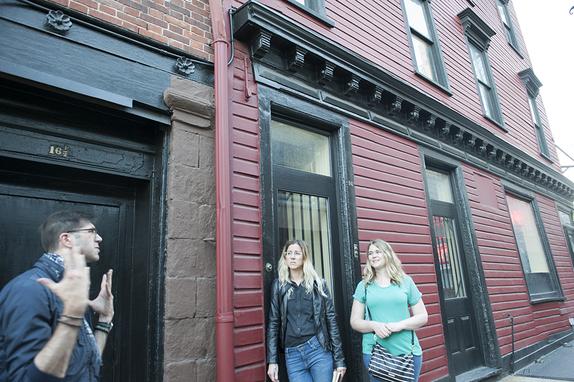